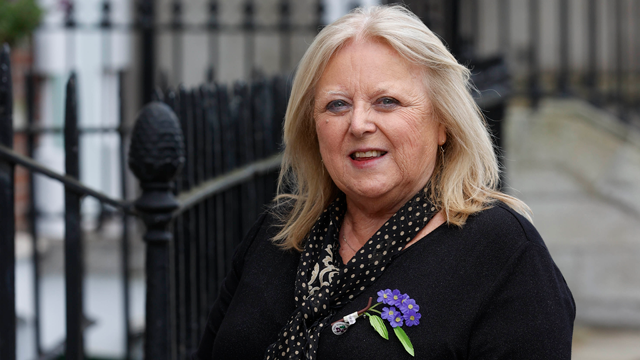 Today, Friday 30th October, is a sad day for the Irish Kidney Association as our much loved and admired Patient Support Officer Lorraine Costello retires. Below is a short tribute, written by IKA founding member and good friend, Angeline Cooke of the Galway branch. We invite you to leave well wishes for Lorraine in the comment section below.

Most of you are familiar with the name Lorraine Costello, who has been our Patient Support Officer for many years. She is the person who has been looking after all those requests for patient aid, so important in these difficult times. She has also been working in advocacy, promoting patients’ rights in a great number of situations that require persistence and extreme diplomacy in dealing with local authorities throughout the country.  Demonstrating great intelligence and skill in articulating her thoughts, nobody could craft a letter like Lorraine!

Hers was the calm reassuring voice when you rang for advice, she was the patient listener when you needed to be referred for counselling. While advocating for patients she forged a successful and mutually respectful relationship with nursing and medical teams in dialysis centres around the country and with Beaumont Hospital’s transplant teams and organ donor coordinators.

But how much do you know about this remarkable, dedicated lady, who shuns the limelight and who has been the mainstay of IKA for nearly four decades? To realise the extent of her contribution to the Irish Kidney Association, we need to take a brief look back at the history of our Association.

The idea of a national association for people suffering from chronic renal failure germinated at the kitchen table of Patricia Doherty, then living in Glenageary, in conversation with her friend Thelma Trevaskis, both personally involved with the difficulties of life on dialysis, with very few kidney transplants taking place. At that time, in the 1970s, it was government policy to have just three Dialysis Units in the Republic of Ireland, one each in Dublin, Cork and Galway, which posed huge hardship on patients, some of whom had to travel long distances for dialysis, with little hope of a kidney transplant.

Patricia travelled around the country, coming to Galway in February 1978, to find out the level of interest in forming a national association to look after the concerns of renal patients and to promote organ donation. The result was a hugely successful Inaugural Meeting, held in the auditorium of the now demolished Jervis St. Hospital in April 1978, attended by several hundred interested people from all over the country. Thus, the Irish Kidney Association was born. Patricia became our first CEO, from 1978 to 1998.

She moved to a tiny office in Eaton Square, Monkstown, Co. Dublin and in 1981 advertised for a part-time secretary. This is where Lorraine’s long-standing involvement with the IKA began.

Galway born, a busy mother of two young children, also living in Glenageary at the time, Lorraine was highly qualified in secretarial work and a part-time job suited her well. As she took minutes at the meetings, she became fascinated by the enthusiasm and commitment of those early founder members, elected by the branches, who formed the National Executive Committee, now the National Board. When the occasion presented itself, she became our full-time secretary, then our Patient Support Officer, a post to which she has dedicated herself for many years and always carried out with great sensitivity, compassion, and discretion.

From Eaton Square, the IKA moved to Donor House in Pembroke Road, Ballsbridge (opposite the US embassy) and from there, in 2000, to our present location in Park West.

Lorraine has been with us all these years and has contributed hugely to the evolution of our association. A little-known fact is that many of our now long-established practices were initiated by Lorraine. For example, in response to a phone call from a distraught mother who had donated her only child’s organs and had not received an acknowledgement, prompted Lorraine to contact the newly appointed Transplant Coordinator Phyllis Cunningham (who has since retired from this role), to set up a system that is still in operation today whereby the donor family is contacted within six weeks of the donation.

Lorraine then suggested to Patricia the idea of organising a Mass which might offer some solace to donor families. That evolved from an annual Mass in St. Mary’s Church, Haddington Road, 35 years ago, attended by just a few hundred people, to the annual ecumenical Service of Remembrance and Thanksgiving in Corpus Christi Church, Homefarm Road, which is such an important event on the IKA’s calendar and is now attended by approximately 2,000 people. Needless to say, every aspect of this exceptionally beautiful and moving event has been carefully coordinated by Lorraine every year.

Although Lorraine was due to retire in May of this year, 2020, when Covid 19 struck, she chose to remain on to be of further service to patients, in this time of crisis. As this year’s Service of Remembrance unfortunately cannot take place in its usual form, a “virtual” service will be televised in November. As we watch this in the comfort of our homes, we need to remember the months of research, time, and effort that Lorraine has put into coordinating every single aspect of the Service. What a farewell gift she has given to us, to be treasured!

A hugely important part of the Service of Remembrance is the Roll of Honour, in which the name and details of each organ donor are inscribed in beautiful calligraphy and is carried with great honour and respect to the altar. Again, it is most moving when, after the Service, donor families quietly queue to view the inscription of their loved ones. It was Lorraine who contacted the calligrapher, Annette Daly, who, to this day, continues to inscribe the names of donors, in her beautiful script.

Looking after renal patients has always been Lorraine’s priority. In speaking to people who have worked closely with her in recent years, the replies were all consistent: she could not do enough for the patients. Her confidentiality was absolute, and she was also good fun! She was totally reliable, and you knew that if you passed a problem on to Lorraine, you didn’t have to worry about it anymore. Remember that we went from three Dialysis Units in 1970s, to 23 Units, 25 branches and over 3,000 members.  A huge cohort of patients and their families seek support for our services, so there has been a colossal increase in her workload.

In her absolute dedication and sense of responsibility to the patients, even when “out of office”, she kept in touch so that no patient would be neglected.

In addition, Lorraine organised and coordinated the National Launch of each Organ Donor Awareness Week, as well as carrying out the protocol for the reception of three Presidents. President Mary Robinson launched our new multi-organ donor card in Ballsbridge in the 1980s, President Mary McAleese officially opened Donor House Park West in 2000 and also in 2007 she attended the IKA’s hosting of an international conference in Dun Laoghaire, Dublin to mark the 9th European Day for Organ Donation and Transplantation, which was attended by delegates from 40 countries. President Michael D. Higgins attended the annual Service of Remembrance and Thanksgiving in Galway Cathedral and officially opened the Circle of Life Garden in Salthill in 2014. He will also participate in this year’s first ‘virtual’ Service of Remembrance and Thanksgiving which will be broadcast on RTE One later this year.

Lorraine was always the quiet person in the background who ensured that these most important events ran smoothly.

I have touched here on just some of the most important aspects of Lorraine’s work. I may also be writing from a Galway perspective, but I know that dialysis and transplant patients from all over the country have benefitted enormously from her help and hold her in extremely high esteem.

So, Lorraine, on behalf of all the members of the Irish Kidney Association, thank you most sincerely for your dedication, kindness, empathy, sensitivity, and untiring work on our behalf.

While we wish you many long, happy and healthy years of retirement with your husband Frank, son Colin and his wife Ciara, daughter Criodhna and her husband Andrew, and your beloved grandchildren, we also hope that you will keep in contact with your many friends in the extended IKA family.

What a wonderful legacy you are leaving us!