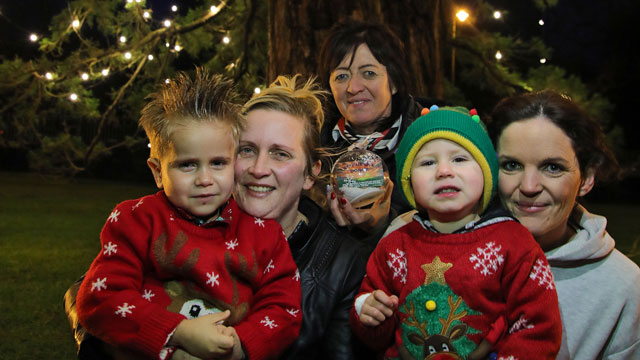 Tomás O’Dowd (age 6) from Coumeenole, Dunquine overlooking the Blasket Islands and Cialan Walsh (age 3) from Waterville and their mothers, Amanda and Fiona, gathered at the century old 100ft high ‘Tree of Light’ on the grounds of  St. Mary’s Cathedral in Killarney along with Teresa Looney from the Kerry Branch of the Irish Kidney Association. They were highlighting the campaign in support of the families of more than 500 people who are currently on transplant waiting lists for heart, lungs, liver, kidney and pancreas transplants.

Tomás, has been receiving nightly dialysis for nine and a half hours at a time for over two years while Cialan, who was born with only one partially functioning kidney, is expected to commence dialysis treatment soon as his kidney function is low and his health, energy levels and weight are declining.

Popular broadcaster and the IKA’s organ donor awareness ambassador, Ray D’Arcy, provides the voice over for the radio advert which will be broadcast on national radio stations in the days leading up to and directly after Christmas Day 2019. In his message to the public Ray explains that you are three times more likely to need an organ transplant than to be a deceased organ donor and encourages families and friends to discuss organ donation over the festive season.

Speaking about the Christmas campaign, Ray said, “Christmas time is the perfect opportunity to have the chat about organ donation with your family. Organ donation is a gift of life. Those who are left behind after a tragic death are the ones who decide if the deceased’s organs will save lives. It is a huge decision at a difficult time that will be much easier to make if you’ve had the chat. So please have the chat this Christmas and save iives in the future. Thank you.”

Amanda O’Dowd explained, “Tomás is our beautiful miracle child. He was given little chance of survival in an early pregnancy scan but yet he defied the odds. He is a happy child despite his health setbacks and being hooked up to a dialysis machine evening night. He started school in September and really loves it. We are hoping that he will be accepted on the transplant waiting list early next year and when this happens several family members want to be tested for living donation. We hope that one of us will be a suitable match but if not, our only hope might be that another family, at a time of huge sadness, have the foresight and compassion to think of others and consider organ donation.”

“Tomás has asked Santa to bring him an electric car this Christmas. We hope that by Christmas 2020 he will have good health after having a successful kidney transplant operation.”

Mother of five Fiona Walsh, a native of Trim, Co Meath, said, “It came as a huge shock to us when we learned that Cíalan our youngest child was a baby that he had only one partially functioning kidney but it was expected that transplantation would not have to be considered until he was 8 or 9 years old. However, in recent months his kidney function has rapidly declined and it is expected that he will commence dialysis treatment in the near future. Once he is put on a waiting list for a transplant myself and his father Jonathan will be assessed for living donation and hopefully one of us will be a suitable match. Cíalan’s hospital visits are becoming more frequent due to his declining health, he is losing weight and now weighs around 12 kilos which is very low for a 3 year old. Our family hope to help raise awareness about children and adults like Cíalan who have organ failure and stress the importance of organ donation.”

Both Amanda and Fiona were keen to acknowledge their gratitude for the care their sons receive from Consultant Mary Waldron and other medical and nursing staff at Our Lady’s Children’s Hospital Crumlin.

For organ donor cards Freetext DONOR to 50050 or visit website www.ika.ie/get-a-donor-card.   Your wishes to be an organ donor can also be included on the new format driving licence which is represented by Code 115. You can also download the free ‘digital organ donor card’ App to your phone.