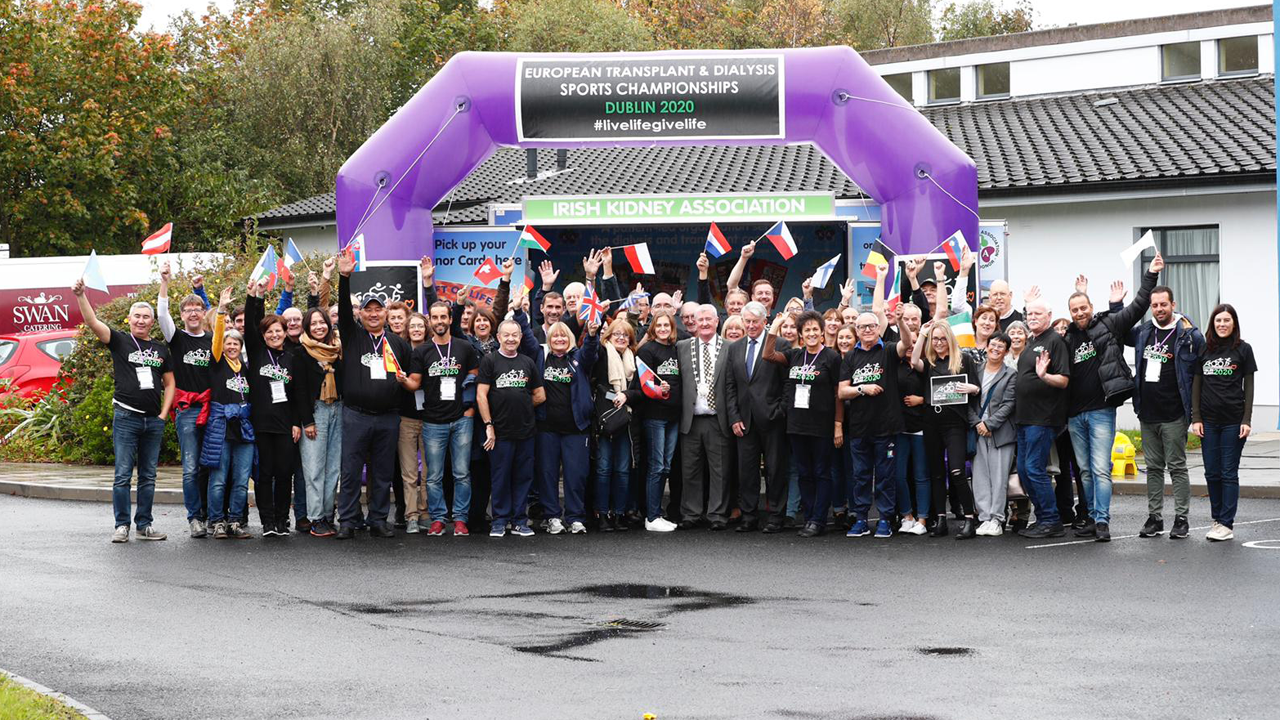 Representatives of 22 nations converged in Dublin this weekend for the official launch of the Irish Kidney Association’s hosting of the 11th European Transplant & Dialysis Sports Championships, Dublin 2020 which will take place next year from 2-9 August ( www.etdsc2020.com ).  The members of the European Transplant & Dialysis Sports Federation gathered at the Irish Kidney Association’s Renal Support Centre at Beaumont Hospital on Saturday, 19th October for the launch which followed an inspection tour of sporting venues. Also attending the launch of the major organ donor awareness and sporting event was Mr. Roddy Guiney, Chairman of the Federation of Irish Sport, the Deputy Mayor of Fingal County Council Cllr. Tom Kitt along with members of the Championships local organising committee and Transplant Team Ireland.

The 2020 Championships will see transplant and dialysis athletes from over 25 nations, ranging in age from 18 to over 80 years old, descend on Dublin’s northside to celebrate life through sport. The Championships offer participants an opportunity to honour their donors and play their part in looking after their own health.

At the launch Mr. Giuseppe Canu, the Chairman of the organising committee for the previous Games held in Cagliari, Italy handed over the athletics baton to Mr. Colin White, the Chairman of the Local Organising Committee (LOC) for the ETDSC 2020. Mr. White is also Secretary of the European Transplant & Dialysis Sports Federation and National Projects Manager of the Irish Kidney Association (IKA).

At the launch Mr. Roddy Guiney, Chairman of the Federation of Irish Sport, said, “We are delighted that the 2020 European Transplant & Dialysis Sports Championships are coming to Dublin. Sport has a major role to play in making for a more inclusive society and events such as this highlight just how inclusive sport can be. While the event is obviously of major interest to all transplant recipients and people on dialysis, I believe its impact will go far beyond that, demonstrating the power and importance of sport for everyone. It will also be another platform for us to showcase our sports facilities and our ability to deliver first class international events.”

Mr. Colin White, LOC chairman, said, “We are so excited to be bringing the Championships back to Dublin which will involve over 500 participants! Since we last hosted in 2010, I have worked closely with each subsequent local organising committee on behalf of the European Transplant & Dialysis Sports Federation. All of this sets us up well to deliver a memorable and impactful event. In the nine years that have followed since 2010 over 2000 people have undergone lifesaving transplants in Ireland. However, the number of people on dialysis has grown by 20% since then. The Games are an important platform to showcase to the public what can be achieved when people say YES to organ donation which is reflected in the tagline #LiveLifeGiveLife.  To add to our already inspiring Irish team, some having taken part in the 2010 games and who are with us here today, we hope that the games being held on home soil will attract lots of enthusiastic newcomers to Team Ireland. Heart transplant recipient Aoife Farrell from Bray and Susan Mulligan from Castlerea, Roscommon who underwent a kidney transplant just a few months ago are also here today. We would also encourage support from volunteers, individuals and the business community to help us make this an unforgettable and hugely successful sporting and organ donor awareness event.”

Ms. Judit Berente from Hungary and President of the European Transplant & Dialysis Sports Federation, said, “The Irish Kidney Association proved to be an excellent Games organiser and host in 2010. Since then, the Association has developed a lot, and many great Irish athletes have appeared in the transplant championships. I love the spirit of the Irish team, and I hope that we all will feel this spirit during the week of the coming European Transplant & Dialysis Championships.”

The Championships will allow competitors who have either received a transplant (including heart, lung, liver, kidney, pancreas or bone marrow) or who are undergoing dialysis treatment to compete in a broad range of sports on offer. Athletes and supporters will be staying at the games hub, Dublin City University, where many of the sports will be held, while some sports will take place in other parts of Dublin’s northside including the National Aquatic Centre, National Athletics Stadium and the Phoenix Park as well as Tallaght Community School on Dublin’s southside and Black Bush Golf Club in County Meath.

The nine members of the local organising committee (LOC) for ETDSC 2020 include the Irish Kidney Association (IKA) national honorary chairman Colin Mackenzie from Portmarnock,  IKA Chief Executive Mark Murphy, LOC ETDSC Chairman and IKA National Projects Manager Colin White (from Balbriggan), Amanda Bissett, IKA and Robyn Black, IKA and three team members who were on the organising committee for the 2010 Games – Harry Ward (Baldoyle), Michael Dwyer (Cabinteely) and Peter Heffernan (Skerries). Also on the committee is Ron Grainger (Castleknock) who joined Team Ireland in 2014. Ron, a retired urologist and kidney transplant recipient, was selected as one of twelve international ambassadors to be part of an Astellas and World Transplant Games Federation ‘Fit for Life’ global organ donor awareness campaign.  On 5th November 2016 Ron and the other ambassadors were honoured to be introduced to a packed stadium in Chicago when Ireland made sporting history beating the All Blacks at the iconic Soldier Field Stadium.

For more information on the Games, how to support it through volunteering or sponsorship, or to register visit www.etdsc2020.com or contact the Irish Kidney Association tel. 01 6205306

For organ donor cards Freetext DONOR to 50050 or visit website www.ika.ie/get-a-donor-card  You can also download the IKA’s digital organ donor card on your smartphone. Your wishes to be an organ donor can also be included on the new format driving licence which is indicated on the back of the card by code 115.    To request an Organ Donor Card, click HERE