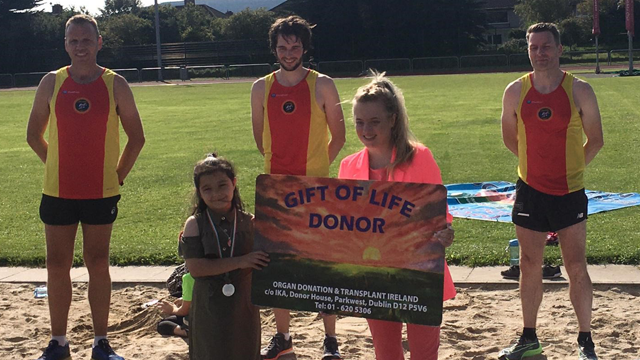 Three Tallaght Athletics Club runners, Dave O’Callaghan, Dave Fitzpatrick, and Dave Callaghan, set themselves an ambitious challenge when they ran this year’s Boston Marathon on home soil today (Sunday, 13th September). They undertook the challenge in support of several Club members who have loved ones affected by organ failure, including two children, and to raise organ donor awareness and funds for the Irish Kidney Association through their GoFundMe page.

In warm and windy weather conditions, the namesake trio, who jokingly call themselves Dave AC, set out on their challenge from Tallaght A.C. clubhouse on Sunday morning at 8am aiming to finish in under 3-hour 10 minutes, the Boston Marathon qualifier time. While two of the men were delighted to comfortably smash the time, with 3 hr 40 sec (Dave C) and 3 hr 5 mins (Dave O’C) times, an injured Dave Fitzpatrick had to pull out of the race six miles before the finish.

This is the first year in its 124-year history that the Boston Marathon has gone ‘virtual’ due to Covid-19.  Virtual running works exactly the same as any other type of running but the difference is that the entered race can be run from any location.

The three Daves and other members of their Club have supported the Irish Kidney Association annual Run for a Life at Corkagh Park previously as several runners in Tallaght AC have family members touched by organ failure and transplantation. At this year’s fun run, which also went ‘virtual’, the trio secured the top three positions for their times over the 5km distance.

In November 2014, Dave Callaghan’s mother Pauline from Old Bawn, Tallaght, flew across the world to Australia to donate a kidney to her then three-year-old granddaughter Layla Henderson. Layla, her twin sister, and her parents are now back living in Dublin. The Henderson family left a message for the trio on the GoFundMe page “Best of luck for Sunday guys! The support for IKA is a deeply personal one for us and like thousands of other families in Ireland, managing chronic kidney disease will continue to impact our little girl and our whole family, forever. To us, you’re 3 heroes out there on Sunday.”

The three Daves also run with Dermot Delany whose daughter Michaela (age 20) has undergone two kidney transplants, the first when she was just 2 years old from a deceased donor and the second from her living donor mother Liz in September 2016. Michaela, a Media Studies student, helped with the promotion of the men’s challenge and was there to cheer them on when they crossed the finish line.

Speaking after the race, the youngest Dave, Dave Callaghan, whose twin niece Layla underwent a kidney transplant said, “we were delighted to see club supporters turn out at the start early this morning and at the  finish point. The warm and windy conditions weren’t ideal but we enjoyed it all the same. Overall we are very happy with our times. I finished in 3 hours 40 seconds and Dave O’Callaghan just a few minutes after me. It was unfortunate that Dave Fitz. had to pull out 20 miles into the race as he was doing really well up until that point. We are delighted that in doing this we can help shine a light on the importance of organ donation and raise money for the IKA.”

Speaking in advance of the run Dave Fitzpatrick who is a coach at Tallaght A.C. explained, “In February 2019, the three of us ran a marathon in Seville, Spain and achieved times good enough to qualify us for the 2020 Boston Marathon, normally held on Patriot’s Day in April. Obviously Covid-19 meant this year’s event was cancelled and a virtual event was planned for September instead. We aimed to run the marathon in around three hours each as this time is considered a decent benchmark for marathon runners and annual statistics show that only 1% of all marathon finishers get below the 3 hour barrier. We knew our goal would be tough to achieve particularly in a virtual event where a large field of competitive runners and supportive crowd are missing. The three of us are delighted to be taking part  and for the generous support we received raising over €3500 so far for the Irish Kidney Association and donations are still coming in on the GoFundMe page. One hundred per cent of the funds raised will go directly to the Irish Kidney Association.

When not challenging themselves physically, the dynamic trio work in demanding jobs. Dave Callaghan, the youngest (aka Young Dave) holds an Honours Degree in Business Management and works for Paddy Power Betfair. Dave O’Callaghan is a director of a successful software company and David Fitzpatrick is an Associate Professor in Biology at Maynooth University.