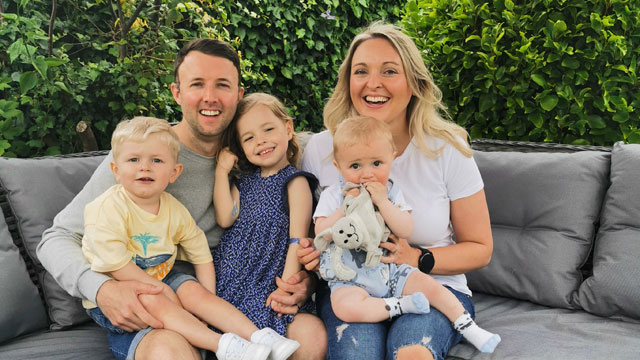 Four-year-old girl Ally Whitston is enjoying a new lease of life thanks to her father David (35) who came to her rescue in March this year by donating a kidney to her.  Parents Michelle and David, are now looking forward to celebrating Father’s Day with Ally and her two younger brothers Riley (2) and Rian (10 months). This Sunday the family from Greenhills, Dublin 12 will take a mini break in Waterford, their first family holiday away since the transplant and free from nightly dialysis which Ally had been undergoing for two years of her young life.

Ally was diagnosed with a genetic condition called Congenital Nephrotic Syndrome when she was just three weeks old and she spent the first five months of her life in Crumlin hospital with her mother Michelle by her side.  Ally’s life revolved around lots of surgeries and infusions. At the age of 5 months she had one of her kidneys removed which paved the way for her to be able to spend 5 nights a week at home and just 2 overnight stays in hospital.  When she was two and half years old her kidney function had failed completely and she began a form of hemodialysis (Peritoneal) which involved being hooked up to a machine initially for 6 nights a week for 10-11 hours but this quickly progressed to 7 nights a week for 13 hours at a time.

Michelle (33) explained, “while on dialysis Ally could not have more than 500mls of fluid a day and on hot days we tried to appease her by letting her have an ice cube to stop her from feeling thirsty. We were in contact with the hospital every other day as her blood pressure was really difficult to stabilize. Having younger brothers made for a busy household and this was a welcome distraction for Ally as she really loves playing with them”.

“It was a massive relief when Ally was accepted onto the waiting list for a transplant in August 2021 and David immediately put himself forward to be a living donor. Thankfully he proved to be a suitable kidney match. I did not go forward for living donation as I was not long after giving birth to Rian who is now 10 months old and I also had a toddler at home, Riley, to care for. My parents were a huge help and they lived nearby. By the first week in February all the necessary tests were done to ensure that both David and Ally were well enough to proceed with the transplant operations. The transplant went ahead on the 14th March. David, who works as a data centre technician, took two weeks off work to isolate before the transplant.”

“On the day of transplant David was taken down to theatre at 8am on a Monday morning in Beaumont Hospital to  have his kidney removed. His kidney was taken to Temple Street where Ally was waiting in theatre at 12 noon for the kidney to be transplanted. Obviously it was a very worrying time for me as I was concerned for my husband and my child, both in different hospitals undergoing operations on the same day. My first worry was over when I got a call from Beaumont to say David’s procedure went well and then I took a huge sigh of relief when the surgeons in Temple Street came to me at 5pm to say that everything had gone well for Ally.

“David was discharged from Beaumont 5 days later and I collected him and brought him to see Ally in Temple Street. It was very emotional when they were reunited as they had been apart for two weeks with Ally being taken into hospital a week before transplant in preparation for the operation.  It was amazing to see how well she had improved and that her blood pressure had stabilized. She looked so well. She was allowed home two weeks after the operation and we haven’t looked back since.”

When asked about what it felt like to be a kidney donor a humble David said, “I just played a small part in it and can’t take all the credit. Donating a kidney was the least I could do. I am so glad it worked out and Ally can now enjoy a normal childhood.  A huge weight has been lifted. Michelle did all the hard work up until then caring for Ally, staying with her in hospital for the first five months and all the visits and overnight stays afterwards, while also looking after our two boys who came along later. It is wonderful to see Ally bouncing around now with bundles of energy. She is growing more and we are all really enjoying this summer, not tied to a timetable around dialysis and sickness. Ally is a confident little girl and is enjoying life.”

Michelle and David are keen to acknowledge the support of medical and nursing staff.  Michelle said, “the teams at Crumlin and Temple Street have been truly amazing and the team at Beaumont Hospital took such good care of us also. We would like to acknowledge the support we received from my parents Michael and Ann Sweeney who have been our rock with their practical and emotional support and to David’s employers also who have been so understanding all along of our situation. The Irish Kidney Association has also provided great advice and support and that is why my father’s workplace CJK Electrical did a fundraiser at Christmas with some proceeds going to the kidney charity”.

Michelle said, “it has been a long road to get us here and we feel huge relief and a sense of gratitude to be able to finally get back to normal, but still hectic life with three young children”.

STATEMENT ON NPHET’S RECOMMENDATION FOR REMOVAL OF MASK WEARING MANDATE