The Irish Kidney Association is delighted that the Minister for Health, Simon Harris TD, has brought Organ Donation to the Cabinet for discussion. The Minister rightly realises that we have an opportunity to change practices and improve rates of organ donation and transplantation in Ireland and, thus transform lives.

To date, organ donation and transplantation practices in Ireland have been governed by best practice protocols and the Human Anatomy Act of 1832. It is clearly time to move forward, to look to our existing practices and resources, the experiences of other countries and derive best practice for our country going forward to guarantee a world-class organ donation service.

Many countries have gone the ‘opt-out’ route and ALL will testify to the fact that this approach, on its own, is not the solution. They have accepted the need for focused resources such as the deployment of specialist nurses for organ donation to cover all the hospitals that have an Intensive Care Unit and the provision of a continuous public awareness / education campaign. We have also seen recently in the media that altruistic living kidney donation has yet to be introduced in Ireland despite there being willing donors.

We need to initiate a Potential Donor Audit to understand the strengths and weaknesses of our system and ensure that our practices adapt to meet the needs of our changing population and circumstances.

A key misconception that is at the core of the public opt-out debate is that a person has to have an organ donor card to be considered a potential organ donor. This is simply not true. The card is an ‘ice-breaker’ for what can be an uncomfortable conversation within a family setting. When a potential organ donor is identified their family is approached and asked for consent for donation whether a donor card is present or not. It is thus clear that the introduction of an opt-out system cannot increase the pool of potential donors. Therefore, the focus needs to be on improving rates of family consent.

At this point, let’s not forget, to be a potential organ donor one must be in an ICU on a life support machine when declared brain stem dead – this immediately narrows down the pool of potential donors significantly (approximately 1 in 1000 deaths).

It is clear that family consent is a key determinant in the success, or otherwise, of any organ donation programme. A family is much more likely to consent when they know the wishes of their loved one. In offering an opt-out (No) Organ Donor Register only, the Minister would remove a clear call to action in terms of sharing wishes with family – the message would be that if I do nothing I will be considered a potential donor… The donor card would also become obsolete. 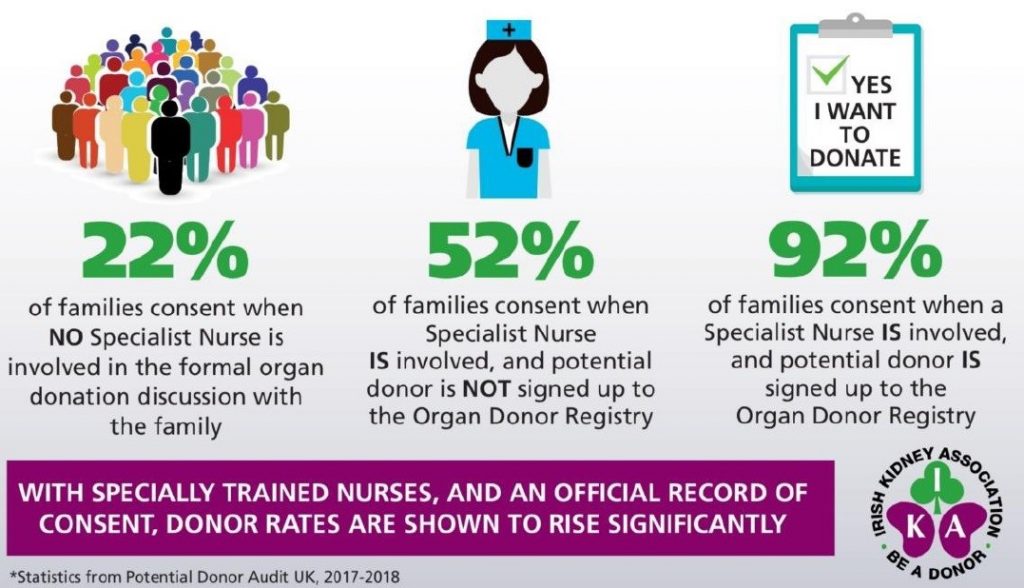 The message from these figures is clear, the use of an opt-in (Yes) Organ Donor Register and the involvement of Specialist Nurses for Organ Donation improves consent rates significantly compared to when they are not involved. What is also evident is that an annual Potential Donor Audit would bring into focus the policies that are working and the areas that need additional input.

The Irish Kidney Association is proposing that rather than restricting himself to an opt-out (No) register the Minister should also have an opt-in (Yes) register and thus, for the first time, offer a record of an individual’s decision which would be available to the families of potential donors. We would move from asking the family for a decision to asking the family to confirm the decision of their loved one.

The time of potential donation is very traumatic for the family of the deceased. If they can be given the reassurance that their loved one had proactively indicated their wish to be an organ donor they are more likely to give consent as evidenced by the figures given above from the Potential Donor Audit in the UK.

The Minister already has the recorded organ donation wishes of over 900 000 people available to him but he has so far declined the information. The Irish drivers licence changed 6 years ago. Question 20 on the current application form states: Place an X in the box provided if you would like code 115 to appear on your driving licence indicating your wish to become an organ donor.

That is over 900 000 people who wanted their organ donation wishes publicly recorded and that is without a focused public awareness campaign. Bear in mind that we are only six years into the 10 year roll-out of the ‘new’ format licences. If we project forward the numbers to the end of the roll-out we would have approximately 1.5 million people (over 40% of the adult population) publicly declaring their wishes to be an organ donor. That is before looking at any new initiatives. This data has the potential to have an enormously positive impact on family consent rates as shown in the UK data.

The establishment of the Organ Donation and Transplant Ireland office four years ago has been a positive step in the development of practices in organ donation and transplantation in Ireland. The Minister is clearly ready to move things forward. The Irish Kidney Association feels that his proposal to introduce an Opt-out (No) register is a missed opportunity and that he should consider a Yes / No register using the data from the Driving Licence records as a starting point. The deployment of Specialist Nurses for Organ Donation has proven to be extremely effective as shown in the UK statistics and should be followed here also. We can also learn from the experiences of countries such as the UK and the Netherlands in relation to altruistic donation and cardiac death donation.

In conclusion the Irish Kidney Association asks Minister Harris if he will also announce the vital funds required to improve the infrastructure surrounding organ donation practices or does he believe the legalisation alone will improve the situation for the people on the various transplantation waiting pools?