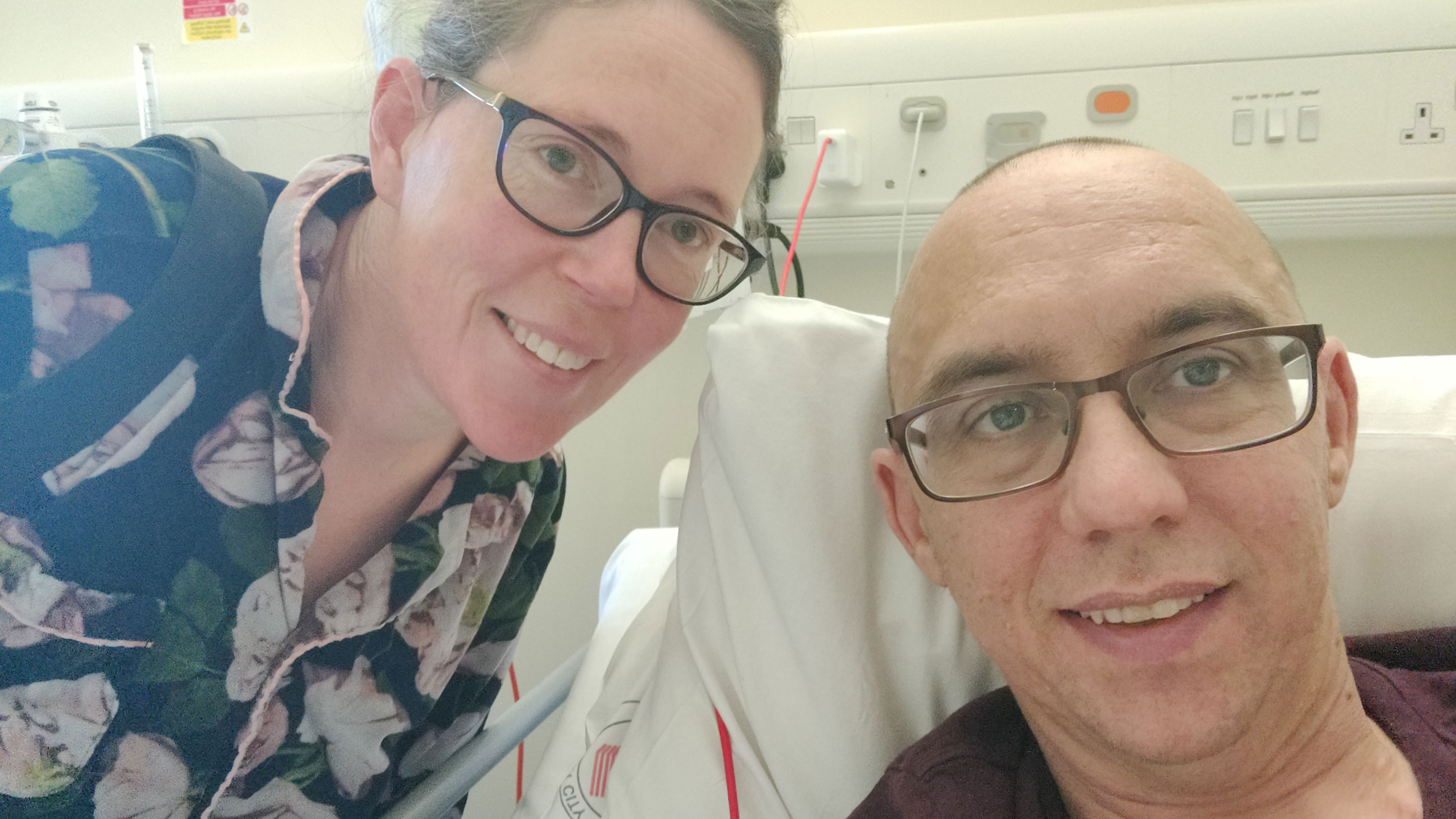 A Galway couple is celebrating a successful cross border four-way kidney transplant swap which took place on 4th January 2022. Eoin Madden from Kiltullagh in County Galway is now enjoying a newly transplanted kidney which he received from a stranger in the UK as his wife Michelle (Shelly) Tooher, is recovering from donating one of her kidneys in a process known as ‘paired exchange’.

The carefully orchestrated event, which involved operations in two hospitals, in Northern Ireland and England, was facilitated through cooperation between the HSE Treatment Abroad Fund, the UK’s national health service, Beaumont Hospital and Belfast City Hospital. There was also impromptu support from two members of the Police Service of Northern Ireland who came to the rescue as the couple’s car gave trouble enroute to Belfast City Hospital the day before the scheduled operations. 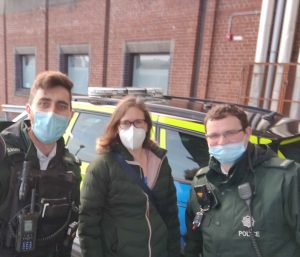 Eoin and his wife Michelle are the first Irish couple this year to go through the UK Living Kidney Shared Scheme. On 4th January 2022, Michelle, the mother of three, underwent an operation to have one of her healthy kidneys removed at Belfast City Hospital paving the way for Eoin to receive a kidney from a UK based living donor later that day. Michelle was not a suitable match for Eoin who had been receiving dialysis treatment for over five years following two previous kidney transplants. This had led to a build-up of antibodies, reducing his chances of finding another suitable donor.

Michelle’s kidney was flown to a hospital in the South of England to be transplanted into an awaiting patient. Later that day, Michelle’s extraordinary deed was reciprocated, as her husband, Eoin, received a lifeline through a healthy donor kidney which was retrieved in England and flown over as ‘special cargo’ to be transplanted into him. Michelle, now weighing in a little lighter minus one kidney, is looking forward to returning home to her children in a few days. Eoin will remain in Belfast for a few more weeks as the newly transplanted kidney he received from an unidentified stranger in the UK settles in. 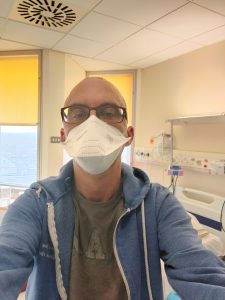 Two months prior to the life changing transplant, Eoin, while shopping for Halloween decorations at his local Homestore + More at Wellpark, was overjoyed to receive a phonecall confirming that a suitable donor kidney match had been found for him through the UK Living Kidney Paired Scheme and a suitable recipient was identified to receive a donated kidney from his wife Shelly.

The operations were scheduled to take place just before Christmas, on 16th December, but a last-minute hitch after travelling to Belfast City Hospital arose. Just after his wife Michelle was ready to be wheeled down to theatre to have her kidney removed, the intended UK recipient had become unwell and the operation could not proceed. All parties were stood down and a revised date of 4th January was set. The couple returned home to cocoon, once again, away from the threat of the escalating cases of COVID-19, with their three children, ages 3, 7 and 10. Michelle and Eoin had taken a couple of months extended leave from their places of work, and their two older children were also taken out of national school at the beginning of December to cocoon.

Two days after his successful transplant operations, Eoin shared the good news on his social media describing how he felt like ‘A New Man’ since receiving his kidney transplant, his third, a lifeline that he and his wife Michelle, who he affectionately refers to as ‘Shelly’, had almost given up on.

Before entering the paired exchange programme in the UK, Eoin was advised that as his two previous transplants in 2001 and 2008 which he received from deceased donors had led to a build-up of antibodies, the prospect of him finding a suitable kidney was one in a million.

Eoin explained, “after Shelly was screened by Beaumont Hospital for suitability to donate one of her kidneys to me, we received the disappointing news that she was not a suitable match for me. It was then that a consultant at Beaumont, Dr. Colm Magee, suggested that we enter the paired exchange programme in the UK which, with a larger pool of donors, might result in a suitable match, although, with my antibody build-up there were no guarantees. The scheme offers four cycles in a year to find a suitable match. We feel blessed that on the very first cycle we were entered into that a suitable match was found for me, while Shelly was found to be a suitable match for a patient in the UK. We hit the jackpot first time!”

“Organ donation really is the gift of life. My life has been extended now because of three donors. I will always be mindful of the selfless families of two deceased donors who gave me many extra years of better health and allowing me to enjoy wonderful experiences including getting married to my beautiful wife who, as well as giving me three beautiful children, has now become a hero kidney donor.”

“We are so grateful to all the people who helped us on my health journey. There are so many people to thank. Firstly, the amazing team at Belfast City Hospital who do incredible work and filled us with confidence that we were in safe hands under their expert care. They really have a world class team there. In 2020 in the early stages of Covid, as other transplanting hospitals’ programmes temporarily paused in the UK, Belfast City hospital performed a record breaking 101 transplants in 101 days, and in doing so the significantly reduced their kidney transplant waiting lists.”

Keen to acknowledge the goodwill that both Eoin and Michelle experienced, Eoin said, “We will never forget the kindness we received from PSNI Officers Aaron Chambers and Matthew Millen who  came to our rescue when we experienced car trouble on our way to Belfast City Hospital and they drove us the rest of the way there. We would like to thank Beaumont Hospital and the HSE for facilitating the process, the consultants and dialysis team at Merlin Park in Galway who have cared for me for over two decades, and the Irish Kidney Association who have also been a huge support for many years. We are grateful for the goodwill we have received from our friends, neighbours, work colleagues and the whole community of Kiltullagh”.

Before saying goodbye to her husband to making her journey home to Galway, Michelle said, “it has been an incredible experience and we are both so relieved Eoin’s transplant was a success. We feel so uplifted with all the good wishes and support we have received from so many people.  Both Eoin’s family and my family have been unwavering in their continued support and have given so freely of their time to us and are caring for our children as we recover from our surgeries. We now look forward to us all being reunited as a family soon.  Our children can now, for the first time, see their father in a new light enjoying renewed health away from the restrictions of dialysis.”

In congratulating the happy couple on their successful transplant, Ms Carol Moore, Chief Executive of the Irish Kidney Association, said, “We are delighted for Eoin and Michelle. This is a wonderful example of how successful cross border cooperation through the HSE treatment abroad scheme can be. Our thanks to the HSE Treatment abroad office, the ODTI, the NHS and Beaumont Hospital who worked so hard to put this agreement in place.  Beaumont Hospital continues to be our national kidney transplanting hospital and despite challenging times during the pandemic it carried out 137 kidney transplants in 2021 of which 35 were from living donors. However, for certain patients on the kidney transplant waiting list in Ireland who are unlikely to be matched with a suitable donor, the UK Kidney Paired Exchange Scheme offers great hope. Last year two other Irish pairs were successful through the scheme, there was just one in 2020 while pre-pandemic, three such paired exchange transplants for Irish patients took place in 2019. There are currently ten other Irish pairs (donor and kidney patient) enrolled in the programme, six managed through Coventry and four in Belfast who receive financial support from the HSE’s Treatment Abroad Scheme.”

Update to Members: COVID-19 vaccinations to begin for kidney patients in Group 4 next week