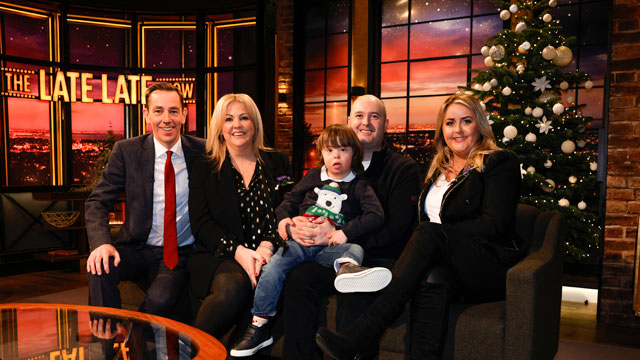 Just five  weeks after receiving her kidney transplant in October, made possible by the selflessness of the family of a deceased donor, an emergency nurse saved the life of her five-year-old neighbour. The story which was shared on RTÉ’s Late Late Show on  Friday, 16th December, was described by host Ryan Tubridy  as a Christmas miracle.

In a desperate plea to save his choking son Jack’s life, Donegal (Dungloe) native Finian Gallagher ran next door to his neighbour Lorna McSwiggan-Martin in Shankill, on Dublin’s southside.  In an emotional interview with the Late Late Show host Ryan Tubridy, Finian’s wife Louise Gallagher described the almost fatal incident as ‘the most traumatic time of our lives’ and  their gratitude to their neighbour Lorna who had ‘carried through’ with the gift of life she had received from an organ donor by saving Jack’s life. Louise had been at work in nearby Dun Laoghaire as her husband Finian was at home and looking after Jack  and with the help of Gardai who gave her a lift and arrived home just in time to see Jack revive with his heart beating again and in the ambulance. Louise said Jack was “sitting up and crying and he looked horrific with no colour in his face”. They sped off in the ambulance to Our Lady’s Hospital for Sick Children in Crumlin.

Although Lorna had not being able to work for a couple years due to the impact of her kidney failure, her emergency nurse training immediately sent her into ‘auto pilot’ and her first impulse on hearing that Jack was in trouble was to call out to her husband Richard to phone an ambulance as she ran next door. Lorna attempted the Heimlich manoeuvre on Jack, who had choked on spaghetti, which proved unsuccessful. She quickly progressed to administering CPR on the non-responsive child who had gone into cardiac arrest. A defibrillator, which the boy’s father frantically retrieved from a nearby shop, could not help save his son who had, by then, no pulse and was non-conducive to  shock therapy.

Lorna described how she used all the strength she had while still recovering from her major transplant operation to continue with  CPR for a total of 9 to 10 minutes by which time the paramedics arrived and took over by carrying him to the ambulance where he ‘miraculously came back to life’ and sat up.  It wasn’t until then that Lorna began to realise the enormity of what had just happened and became emotional. Jack was then transported to CHI Crumlin’s Emergency Department, where Lorna had previously worked, and underwent an examination and some tests which revealed that he had escaped completely unscathed from the traumatic incident before being discharged two days later.  Jack returned home two days later and his first visitor was Lorna. Louise described how Lorna and Jack “shared big hug that will stay in my heart forever. He [Jack] didn’t understand what that hug meant to our family”. On the first night she spent in Crumlin with Jack she sent a message to Lorna asking “how could I ever thank her?. The person who had saved Lorna’s life and had donated their organ to Lorna in effect had carried through and it had carried on to Jack.”

Ryan responded, “No donation – no recipient, no recipient – the worst. That is a remarkable circle of life and generosity and kindness and loving and obviously with respect to the donors family. They should take some comfort to know that it  was a remarkable donation all round.” In concluding the interview, Ryan announced that both families would receive complimentary tickets to see the Lion King at the Bord Gais Energy Theatre. He then addressed the audience and viewers, “That story drives home the need  for everyone out there to have a family conversation this Christmas about organ donation. See www.ika.ie ”

Sitting beside his parents in the Late Late Show’s audience was a bright-eyed healthy Jack with his protective twin sister Izzy. Both were wearing their Christmas jumpers, a timely coincidence as the show aired on Down Syndrome Ireland’s Christmas Jumper Day. Their parents, Finian and Louise, and Lorna and her husband Richard Martin, wore Forget-me-Not flowers, the Irish Kidney Association’s emblem and symbol of transplantation, in a bid to remind viewers, when families gather for the festive season to share their wishes about organ donation.

When asked by Ryan Tubridy about whether the situation was very serious,  she explained that as an emergency nurse she rarely panics however in this circumstance, when the paramedics arrived her emotions took over given the severity.   She said in Jack’s case, she was initially very worried for the outcome . While Finian and Louise are still in shock after the traumatic incident, they believe that were it not for Lorna’s intervention combined with some kind of miracle Jack would not be with them today.

Richard and Finian have now completed a training course in CPR and  plan to share their knowledge of  this life saving intervention within their community.

Lorna who has a congenital renal condition, described how her own life was under threat three and a half years ago, on the birth of her second child by c-section, she went into kidney failure and her two months premature baby girl Nadia Rae Vale required CPR in the first minute of her life. Both mother and baby had to spend apart in different hospitals, Nadia in ICU in Holles Street and Lorna was in St. Vincent’s, and were reunited after a week.  Lorna said,  “it was a difficult time.  But I can’t thank the doctors and nurses enough who looked after me over the years”. Nadia Rae Vale (meaning Ray of Hope) is now three years old and thriving.

In describing the lead up to her ‘totally unexpected‘ kidney transplant Lorna said, “I had been on dialysis for three and a half years, so I was highly sensitised and it was difficult to find a match and I was expecting a longer wait that I got. “I was absolutely delighted to have a phonecall [to get a kidney match]. I am so grateful to my donor and their family and the Irish Kidney Association and all they have done for me. Life has changed so much, life is so much better. I’m not tired all the time and I have things to look forward to.”

Prior to her transformational transplant, Lorna’s kidney failure took its toll and she was forced to take leave of   her job as it was too physically demanding. The need to shield from Covid-19 was another reason to no longer continue working. Several members of her family were tested for living kidney donation but none were suitable matches so her only hope for a transplant would be to remain on the transplant waiting list for a deceased donor kidney transplant. As the grip of the pandemic had loosened by this summer, Lorna, and her American partner Richard, finally got to celebrate their wedding vows, after three failed attempts, in August this year surrounded by friends and family including their children Nadia (3) and Kai (age 13). In lieu of wedding favours at the reception, Lorna and Richard made a donation to the Irish Kidney Association. Lorna, is a native Sandycove, and moved to nearby Shankill a year ago where she and Richard bought a house.

To get an Organ Donor Card, visit: www.ika.ie/get-a-donor-card