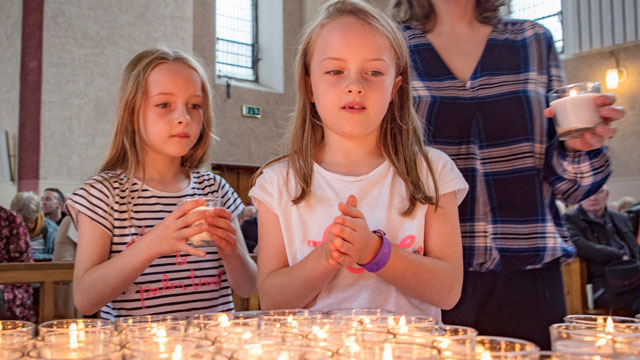 The Irish Kidney Association’s 34th Annual Service of Remembrance and Thanksgiving was attended by a congregation of close to 2000, when it was held in Corpus Christi Church, Homefarm Road, Dublin 9 on Saturday, 5th October, to honour organ donors and their families. Taking part in the ecumenical Service were courageous families of deceased organ donors and living donors and grateful transplant recipients of heart, lungs, liver, kidney, pancreas and bone marrow.  Also attending the Service were members of the wider organ donation and transplant community, including donor and transplant coordinators and medical, surgical and nursing staff.

This symbolic Service is a mixture of sadness and joy for the families of organ donors and transplant recipients alike.  For many donor families this unique Service has become an anniversary to both remember their loved ones, and for transplant recipients, the opportunity to honour and give thanks for the wonderful ‘gift of life’ they have received.

Brian and Patricia Tinsley, from Newbridge, the parents of campaigner Orla Tinsley, whose RTÉ documentary ‘Orla Tinsley – Warrior’ led to a surge of over 7000 requests for donor cards after it was aired in September 2018, attended the Service. Patricia carried the ‘Book of Remembrance’ to the altar. The Annual Service, which is now in its 34th year, also marks the anniversary of the production of the ‘Book of Remembrance’. This ‘Roll of Honour’ has been an integral part of the Service since its inception with the names of organ and tissue donors inscribed by calligrapher Annette Daly from Glenageary, Co Dublin.

Garda Andrew Flood (age 22) who had his passing out ceremony at Garda Síochána College in Templemore in 2018, and who is now stationed at Ronanstown Garda Station in Dublin, took part in the opening procession by bringing the Cross to the Altar. His father, Eddie Flood from Killucan, near Mullingar, Co Westmeath, underwent a deceased donor kidney transplant eight years ago. Eddie is the current Irish Kidney Association’s Honorary National Treasurer.  Also taking part in the opening procession was Grainne and Conor Wyse from Lanesborough, Longford whose brother Ruairi (age 37) saved five people’s lives through organ donation after he suffered a fatal aneurysm.

Other symbolic moments in the Service included processions involving organ donor families together with organ transplant recipients bringing gifts to the Altar.

Among the deceased organ donors remembered at the Service was the late John Byrne (39) from Oldtown, Dublin. John who is deeply missed by his family since his death following a road traffic incident at a pedestrian crossing had Downs Syndrome.  John’s younger loving sister Áine Byrne took part in the procession of gifts taking a candle to the Altar.  Aine’s parents Barbara and Tom Byrne also attended along with her brother Daire.  The Lord Mayor of Dublin Paul McAuliffe also took a candle to the Altar.  Una Doolan from Roscommon town brought ‘Forget me Not flowers’, the symbol of transplantation, to the Altar. Her late uncle John Killoran, from Riverstown, Co Sligo passed away in 1991 and three people benefited from his donation.

Jack O’Riordan (age 3) from Longwood, Co Meath, who will require a combined kidney and liver transplant, brought his favourite toy to the altar, accompanied by his mother Michelle, a nurse at Tallaght Hospital.  Carrying a large Organ Donor Card was Lorraine Corrigan, a mother of two from Ratoath, Co Meath who underwent a kidney transplant 24 years ago when she was 10 years old.

Members of the medical community were among the readers at the Service. The first and second readings were read by Transplant Surgeon at Beaumont Hospital Dilly Little and Prof. Jim Egan, Director of Organ Donation and Transplantation Ireland (ODTI) respectively.  A ‘Prayer of Thanksgiving’ was read by Caroline Lynch, Organ Donor Coordinator, ODTI.  Aoife Coffey, Recipient Transplant Co-ordinator, St. Vincent’s University Hospital said the third reflection which followed the first reflection by Rev. Alan Bowl, Presbyterian Church and second by Eoin Madden from Athenry, Galway who has returned to dialysis treatment following kidney transplant.

The first ‘Prayer of Thanksgiving’ was read by Peter Heffernan, a kidney transplant recipient from Skerries who enjoyed success winning two bronze medals for swimming at the World Transplant Games this summer. Living kidney donor Joan Gavan, from Donohill, Co Tipperary read the second Prayer of Thanksgiving.  Joan is a member of the Association’s Liturgy Committee and she and her kidney recipient husband Willie were in a successful paired exchange kidney transplant in Coventry, UK last year. Another prayer was read by a child donor’s mother Tracey Flahive, from Blessington who now lives in Naas. Her late son Conor’s organs were donated following a car accident in 2008, just days before he was to celebrate his tenth birthday.

Bringing the Book of the Gospel to the Altar was Transplant Team Ireland member Mike Kiely from Mitchelstown, Cork whose sister Annette donated a kidney to him in 2012.

Each member of the congregation was invited to carry a lit candle to the Altar, to the accompanying music of the Pro Nuova Music Group Choir which has performed at the annual service since 2016. Members of Transplant Team Ireland, who participated in the World Transplant Games and the British Transplant Games this summer also took part in the emotive ‘Service of Light’.

This year’s Ecumenical Service was led by Monsignor Martin O’Shea, Parish Priest of Corpus Christi Church, Archdeacon Gordon Linney, retired Archdeacon of the Church of Ireland, Dublin and Rector of St Paul’s Glenageary, Reverend William Black, retired Rector of the Parish of Drumcondra, North Strand and St. Barnabas and Reverend Alan Boal, Minister at the Abbey Presbyterian Church in North inner city Dublin. All Clergy have faithfully participated in this unique Service for many years.

Organ donor families were invited to view their family’s entry in the ‘Book of Remembrance’ at Corpus Christi Church for a short time after the Service.  Refreshments were served in the adjoining Community and Scout Hall.

The concept for the Service, which is now in its 34th year, evolved from a grieving organ donor mother who contacted the Association explaining her distress and sadness that her son’s organ donation had never been acknowledged. At the time there was no system in place at the Old Jervis Street Hospital to acknowledge and thank organ donors and their families.  In consultation with the then newly appointed National Transplant Co-ordinator, Phyllis Cunningham, it was decided that a Service be held to publicly acknowledge and recognise the courageous generosity of organ donors and their families. The inaugural Service, in 1986, had an attendance of 300 people in St Mary’s, Haddington Road, Ballsbridge which was the Association’s current Parish Church. Since then, the numbers have increased annually with an attendance close to 2000 people now attending from all over Ireland.