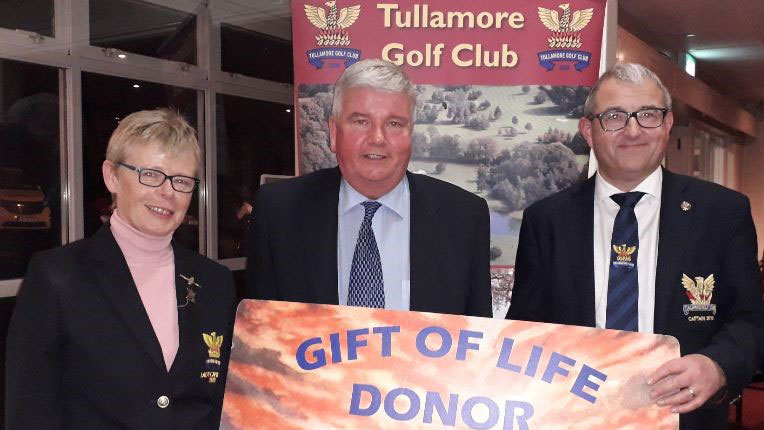 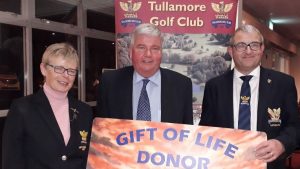 Lung transplant recipient Val Kennedy, from Portarlington, Co Laois was given special recognition at an awards presentation hosted by Tullamore Golf Club on Saturday night 3rd November for increasing organ donor awareness and competing in the European Heart and Lung Transplant Championships which were held in Italy in June 2018.

Around 200 people attended the special event at Tullamore Golf Club which celebrated the accomplishments of its successful teams and individual members. While being honoured at the event Val Kennedy, a Tullamore town native, was happy to share the message about the importance of organ donation and transplantation  and with the support of kidney transplant recipient Dermot Glynn on the night, many of the attendees were inspired to take home organ donor cards.

Val, an avid golfer suffered a sudden and dramatic health decline in April 2015 just four days after winning a golf competition at Tullamore Golf Club. A lung transplant was his only hope of survival after receiving a diagnosis of Idiopathic Pulmonary Fibrosis which left him 24 hour oxygen supply dependant.  The former Tullamore based businessman underwent his life saving single lung transplant in Spring 2016 at the Mater Hospital Dublin.

Following the Golf Club’s awards night, Val Kennedy said, I feel honoured and grateful  to be among the wonderful talent given special recognition by Tullamore Golf Club. It’s thanks to my donor who gave me the gift of life that I am here today.

For organ donor cards Freetext DONOR to 50050 or by clicking here.