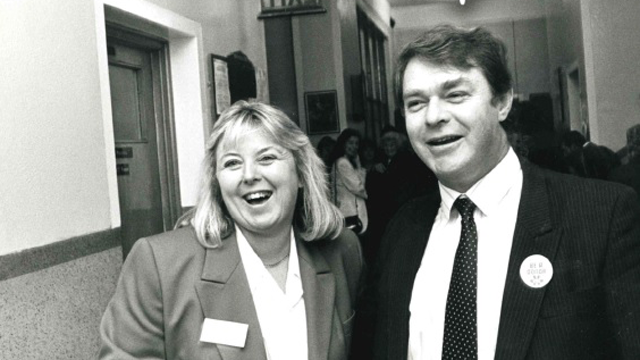 Mark and Lorraine Costello, who also retires later this year

Today, Wednesday 30th September, marks the end of an era for the Irish Kidney Association as our long standing Chief Executive Officer Mark Murphy retires. Below is a short tribute, written by one of Mark’s good friends, member since 1998, and now Board Member Valerie Brady. We invite you to leave well wishes for Mark in the comment section below.

When you think back at the year 2000 you may find yourself wondering, what happened in that millennium year, what was going on in the world?
2000, or Y2K as it was more commonly known, was the year Destiny’s Child dominated the music charts, The Millennium Dome opened, the world was obsessed with Brad & Jen, you used a floppy disc to back up your data, there was a holy hour on a Sunday between 2 and 4 where pubs were forced to close and the Irish Kidney Association appointed a new CEO.

As is so often in life, not everything stands the test of time. All of the above are now either obsolete or gone with the exception of one. For two decades now Mark Murphy has been the CEO of the Irish Kidney Association steering the organisation through buoyant and difficult times alike. Throughout his illustrious career Mark has overseen and driven the transformation of the Association to where it is today, raising the profile of the IKA and promoting organ donation.

Given the task of paying tribute to a longstanding CEO is an extremely difficult one, but an honour none the less. Where do you begin and what do you include? In a career like Mark’s it is impossible to cover everything that he has achieved down through the years. From Editor of the Support Magazine, Advocate, Lobbyist, Statistician, Problem Solver, Event Planner to taxi driver, the list is endless.

Mark’s journey with renal disease began long before his appointment as CEO. He had almost first-hand experience when he found himself in the position of supporting and caring for someone with renal failure. His first wife Bernadette sadly lost her battle with renal failure and subsequently passed away. This had a profound effect on Mark and influenced by this experience, Mark remained a member of the Association and later joined the National Executive Committee.

During his time on the Executive Committee he realised the need for all members to have an input into the organisation. Upon his appointment as CEO he brought about the changes required to ensure that all branches would have representation at the table. 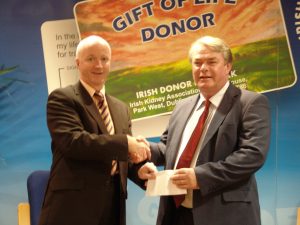 As many of you will know, Mark is not the shy type, and this has meant his voice has been heard loudly both nationally and internationally. As a respected advocate and contributor, he has until recently held the position of President of the European Kidney Patients Federation. He is the only non-medic on the National Organ Donation and Transplantation Advisory Group and he has held positions on the governing councils of both the European Transplant and Dialysis Sports Federation and the World Transplant Games Federation, to name but a few.

His collaboration with various European and International organisations has given Mark a vast knowledge base and the ability to analyze and dissect often complex data and figures. Often times he has been mistaken for a medical professional such is the depth of his knowledge. In fact, in his office he proudly displays a certificate with the title “Dr. Mark Murphy” received from a medical conference he attended.

Through his work at an international level he built up the credibility of the Irish Kidney Association at a domestic level and this has been instrumental in ensuring that the voice of the patients has been represented at decision-making level within the government and the HSE for many years.

Since taking office Mark has

All of the above does not include the work that goes into the day-to-day running of the organisation.

More recently, Mark has guided the organisation through the current Covid-19 pandemic, delaying his retirement to ensure there was a steady hand steering the ship. We thank him for his continuing care and thought for the patients during these turbulent times.

We are sure there are many with a fond story or memory to tell about Mark. Some may remember the banter had at an undisclosed location, others may remember hearing a talk and the impact it had on them at that moment in time. Many will know the friendly ear that listened and the sound advice given by him.

We will be forever indebted for Mark’s vision and commitment to the Association, always ready to go to battle for the patients. After two decades as our Chief Executive Officer, Mark Murphy leaves a long and impactful legacy not only on the Irish Kidney Association but on the wider dialysis and organ transplant community.

We wish Mark and Frances well as they embark on a new chapter in their lives together.