It is disappointing to hear that the Minister for Health does not want valuable information to assist Organ Donor Families in consenting to donate organs.

The Irish drivers licence changed 6 years ago. Question 20 on the application form states: Place an X in the box provided if you would like code 115 to appear on your driving licence indicating your wish to become an organ donor.

We now have 915,000 people who have chosen to allow Code 115 to be printed on their drivers licence. In four years’ time everyone will have the new format licence. If the current trend continues over 1.5 million people or 41% of the adult population will have Code 115 on their licences.

The response that Senator Mark Daly received today in the Seanad, during Organ Donor Awareness Week 2019, confirms that Minister Harris does not see the merit of having people’s organ donation wishes available to their next of kin when they are asked to make a decision about organ donation.

The Minister clearly does not understand the dilemma that so many grieving families go through. Proof from the potential donor audit in the UK emphatically shows the immense value of a registry in assisting donor families by empowering them with the knowledge that their relative, a potential organ donor, had specified that they would like to be an organ donor. 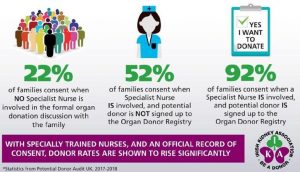 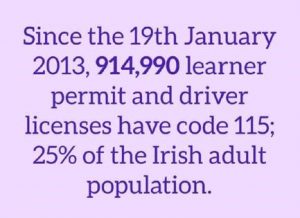 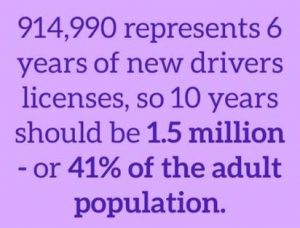 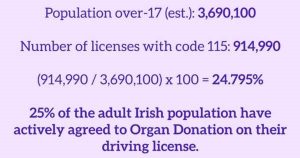 The question asked in the drivers licence application is for permission to make the individual’s wish about organ donation visible to all who see or demand to see the licence – this is evident from the phrasing of the question on the application form. It is not on the licence to remind the individual of their own decision. It is obvious it is for others to see Code 115 and to utilise the information. Every country that has a driver’s licence that has an indication of organ donation wishes,  utilises it.

The Minister for Transport has the information and the Minister for Health does not want it. The Minister does not want an Organ Donor Registry of the population that say “yes” to organ donation. The existing information sitting with the driver’s licence authorities would give a significant start to an Organ Donor Registry. Rather than going to the expense of just capturing the ‘no’ respondents as is proposed in the Minister’s legislation. It would make more sense to also capture the ‘yes’ respondents and consequently offer the opportunity for  the families of those who have indicated their wishes (either way) on the registry to make an informed decision.

His proposed legislation suggests that consent to organ donation is going to be deemed. In the same breath he says the next-of-kin (the Family) will always be consulted and if the next-of-kin object, donation will not proceed.

Essentially, nothing changes. The health service has already indicated clearly that they will not deem consent and without the family say so, they will not proceed to organ donation.

The Minister has been convinced that this idea of soft opt out will help organ donation conversion rates. His health service has already rejected its implementation as have all of the health services in Europe. No country deems consent, and all seek and need consent of the donor families regardless of the types of laws in place in each jurisdiction.